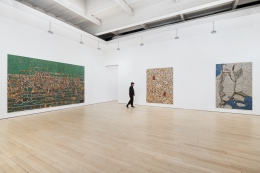 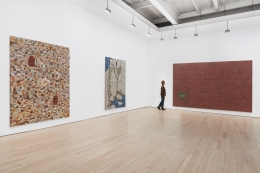 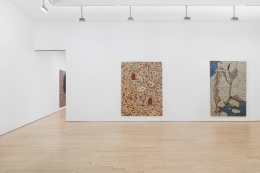 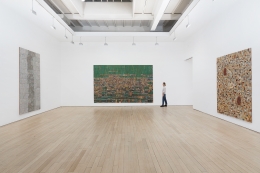 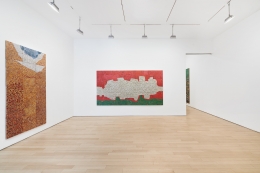 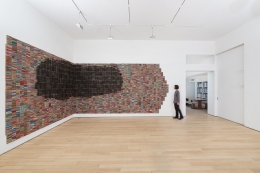 James Cohan will present NOISELESS, an exhibition of new work by Elias Sime, at the gallery’s Chelsea location from April 27 through July 12. NOISELESS is Sime’s third solo exhibition at James Cohan. The gallery will host an opening reception with the artist on Saturday, April 27, from 6-8 pm.

Ethiopian multidisciplinary artist Elias Sime creates intricate, wall-mounted works on a monumental scale from discarded technological components—including salvaged motherboards and electrical wires—that have traveled from far-reaching locations across the globe to his hometown of Addis Ababa. Sime meticulously weaves, layers and assembles these found materials into abstract compositions. Sometimes his idea dictates the material, while other times the material dictates the idea. Sime titles this body of work “Tightropes,” in reference to the precision and discipline required to walk across a tightrope, as well as the tenuous balance between the progress technology has made possible and its detrimental impact on the environment

NOISELESS features ten new large scale works from Sime’s "Tightrope" series, which demonstrate the breadth and dexterity of the artist’s practice. The exhibition’s title is a reference to the creative space of free association engendered by silence. As the artist notes, “Noise is often associated with unpleasant sounds. Noise can also seem to create words, or words can be part of noise. Words channel our thinking along familiar paths towards realistic images. The absence of noise allows our minds to create unfamiliar and abstract images.”

The works in NOISELESS “aim to reflect the unfamiliar and abstract images created in the mind in the absence of noise.” I BURNED IT, 2019, is one of the largest and most prominent pieces presented in NOISELESS. After years of weaving the colorful wires on the small panels that make up the piece, Sime burned the surface, exposing the copper behind the colorful insulation. He remarks: “Nature is full of vibrant colors, which we humans not only enjoy, but often expect to see. I burned the surface of the painstakingly created colorful piece to invoke a dialogue about the identity of colors.”

The Wellin Museum of Art at Hamilton College will present Elias Sime: Tightrope in the fall of 2019, marking the artist’s first major museum survey. Curated by Tracy L. Adler, the Wellin Museum's Johnson-Pote Director, the exhibition highlights Sime's work from the last decade, much of which comprises the series entitled "Tightrope," alongside a selection of early works critical to the artist's development. On view from September 7 through December 8, 2019 at the Wellin Museum of Art, the exhibition will travel to the Akron Art Museum in Akron, Ohio (February 29 – May 24, 2020), the Kemper Museum of Contemporary Art in Kansas City, Missouri (June 11 – September 13, 2020), and the Royal Ontario Museum in Toronto, Canada (December 12, 2020 – April 18, 2021). Elias Sime: Tightrope will be accompanied by the first monograph focusing on the work of Elias Sime and features contributions by Tracy L. Adler; Meskerem Assegued, anthropologist, curator and founder of the Zoma Museum; Karen Milbourne, Curator of the National Museum of African Art, Smithsonian Institution; and Ugochukwu-Smooth Nzewi, the Steven and Lisa Tananbaum Curator at the Museum of Modern Art. This book will be co-published by the Wellin Museum of Art and Delmonico Books • Prestel.

Elias Sime (b. Addis Ababa, Ethiopia) has exhibited extensively around the world. Working with his long-time collaborator, curator and anthropologist Meskerem Assegued, Sime co-founded and designed the Zoma Museum in Addis Ababa, an international art center described by the New York Times in 2009 as “a voluptuous dream, a swirl of ancient technique and ecstatic imagination.” Zoma Museum celebrated its grand opening in its new location in March of this year. Sime’s work has been shown internationally at the Dak’Art Biennale in Dakar, Senegal; the New Crowned Hope Festival in Vienna, Austria; and in the United States at the Metropolitan Museum of Art, New York; the Studio Museum in Harlem; and a survey exhibition that traveled from the Santa Monica Museum of Art, California, to the North Dakota Museum of Art. The artist designed various costumes, props and set-pieces for Peter Sellars’ production of Stravinsky’s opera Oedipus Rex, performed at the Sydney Opera House as well as in Los Angeles, Aix-en-Provence, London and Stockholm.