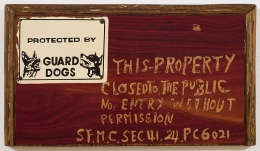 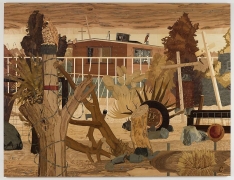 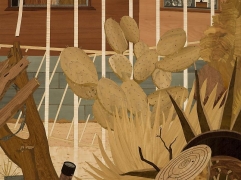 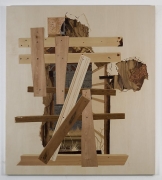 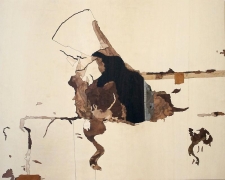 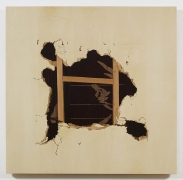 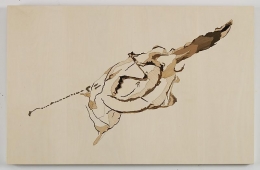 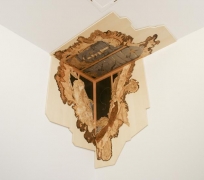 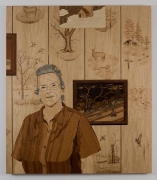 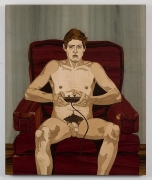 American artist Alison Elizabeth Taylor returns to James Cohan Gallery for her third solo gallery exhibition. Entitled Foreclosed, this exhibition opens on May 7th and runs through June 19th, 2010. Taylor has become well-known for reinvigorating the Renaissance craft of marquetry, or intarsia wood inlay, a medium once made popular during the unprecedented age of luxury of Louis XIV's Court of Versailles. By choosing a medium that is typically associated with wealth and power to portray dystopian scenes of everyday life, Taylor creates a tension between the luxurious connotations of the material and a certain abjectness of the subject matter.

In Foreclosed, Alison Elizabeth Taylor turns to architecture and interior space to reveal the pathos of lives dispossessed by the recent economic disaster and to explore the human impact of the short-sighted policies and greed that triggered millions of foreclosures. Visiting her childhood home of Las Vegas, Nevada, Taylor watched first-hand how an explosive housing market has fallen prey to the bubble-bust phenomena that has become common across the country.

Throughout this new body of work, the viewer experiences an architectural space not through its contents but through its voids. The images in this new body of work focus on the marks, holes, and removals found in derelict homes that have been vandalized in connection with their foreclosure. Taylor's research process included climbing through broken windows and documenting the interiors of foreclosed properties. She explains, "I create works based on the damage I've seen: punched and kicked out holes in drywall, shotgun blasts from inside a house thru the exterior wall, broken doors, windows, stolen pipes and copper wire, taps left on to flood, angry graffiti, stripped interiors, and in one case a hole in the back of the house that squatters had made with a pickaxe, a sort of back door where they could come and go unseen by neighbors." These markings become evidence of the emotional havoc experienced by those removed from these properties. Taylor thus explores the feelings of frustration and loss of power still tangible in these abandoned physical spaces.

exhibitions in fall 2010, Alison Elizabeth Taylor will be the subject of a solo exhibition at the Savannah College of Art and Design, which will originate at the Savannah gallery space and travel to the college's Atlanta gallery space. In 2009 Taylor received a Louis Comfort Tiffany Foundation Award and was the subject of a solo show at The College of Wooster Art Museum, Ohio. exhibitionsly, Taylor's work on view as part of the 185th Annual: An Invitational Exhibition of Contemporary American Art, National Academy Museum, NY curated by Nancy Malloy and Marshall Price. Her work has been featured in numerous group exhibitions, including in 2009 Supramundane at Ambach and Rice Gallery in Seattle; in 2007 The Powder Room, Track 16 Gallery, LA; in 2005, Dirty Pigeons at 96 Gillespie's, London and Other America at Exit Art, NY. Taylor is a graduate of Columbia University, Graduate School of the Arts (2005) and she lives and works in Brooklyn, New York.

For further information please contact Jane Cohan at jane@jamescohan.com and 212-714-9500