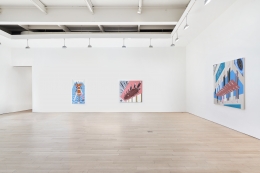 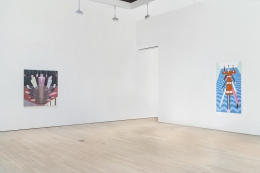 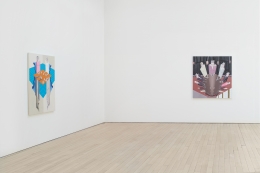 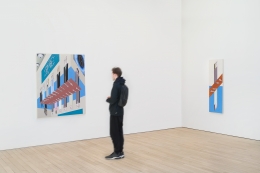 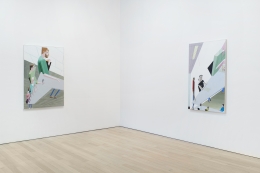 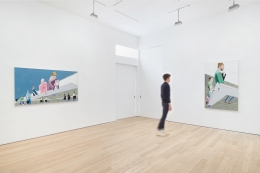 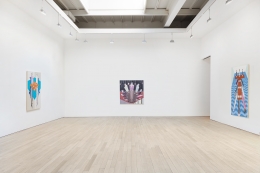 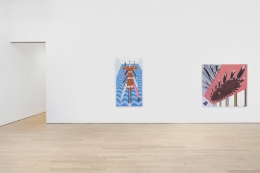 James Cohan will present Situation Rooms, an exhibition of work by Mernet Larsen at the gallery’s Chelsea location from April 19 through June 16. Situation Rooms is Larsen’s second solo exhibition at James Cohan. The gallery will host an opening reception on Thursday, April 19 from 6-8 PM.

Throughout a career spanning nearly sixty years, Mernet Larsen has developed a painting practice that reconsiders the spatial conventions of narrative painting. The vertiginous spaces she renders using altered perspectives, offer familiar versions of reality that are analogous yet alien to our own and take inspiration from the geometric abstractions of El Lissitzky and the narrative stylization of 12th-century Japanese and early Renaissance paintings.

For Situation Rooms, Larsen returns to a familiar subject of people sitting around tables. The title of the show conjures an image of spaces where important events transpire or difficult decisions are made, and, in some of these works, the trappings of governance are apparent. Hands, often involved in simple games, feature prominently in paintings such as Cup Tricks, Drawing Hands, Hand Slap Game and Scissors, Rocks, Paper.

In addition to these new paintings, three works from Larsen’s series of paintings depicting faculty meetings, which began her experimentation with reverse perspective, will also be included in the exhibition. Of these works she writes, “I have always wanted to do a painting of an art department faculty meeting – having spent 35 years of my life attending them. But I couldn’t find a way to make it interesting… I didn’t want a collection of portraits, but a kind of psychological essence of particular moments in meetings.” For Larsen, the “essence” of narrative painting is how the figure inhabits a physical space. She emphasizes this relationship through inventive geometries and perspectives to produce strong feelings of discomfort around the commonplace situations she creates.

Situation Rooms also includes Larsen’s “studies,” which she uses as instruments to meticulously plot her compositions before enlarging them on canvas. These often include gridlines and measurements jotted in its margins, along with other notations and attempts at titles.

Mernet Larsen (b. 1940, Houghton, Michigan) has exhibited extensively since the late 1970s and has been the subject of over thirty solo exhibitions, including Getting Measured: Mernet Larsen, 1957-2017, a comprehensive survey of her work at the Tampa Museum of Art in 2017. She has been featured in more than seventy group exhibitions, including presentations at the National Museum of Women in the Arts, Washington D.C., the American Academy of Arts and Letters, New York, NY and multiple other exhibitions in London and New York. Her work is in numerous collections, including the Whitney Museum of American Art, New York, NY; the Los Angeles County Museum of Art, CA; the Carnegie Museum of Art, Pittsburgh, PA; and the Walker Art Center, Minneapolis, MN among others. Larsen received her BFA from the University of Florida, and her MFA from Indiana University. She lives and works between Tampa, Florida and Jackson Heights, New York.