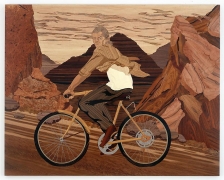 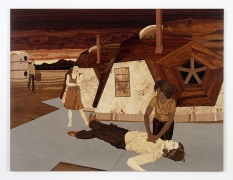 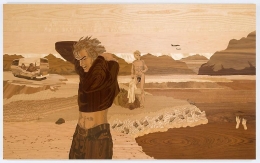 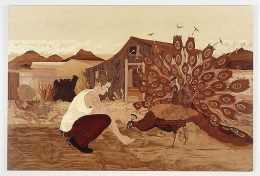 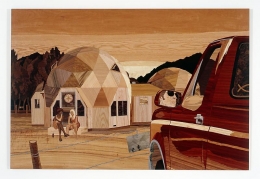 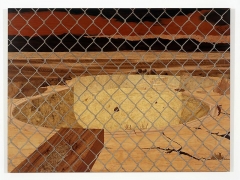 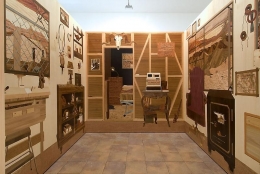 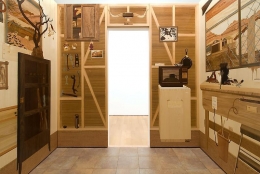 James Cohan Gallery is pleased to announce an exhibition of new works by Alison Elizabeth Taylor, whose marquetry, or wood-inlay, figurative works reveal the hidden histories of everyday lives. In her use of wood veneer, Taylor subverts the material's customary use as a decorative element used to convey a sense of wealth, power and elite social status. Taylor's oblique narratives refer to mainstream American culture and its fascination with large vehicles, sex, guns, video games, religion, hunting and the military. Limited to a palette of natural woods, she innovates by using the grain and tone of the veneer to explore issues of space, surface, line, color and form. Her paintings uniquely transgress the traditional distinction between craft and high art.

The centerpiece of Taylor's exhibition is a free-standing architectural installation in Gallery Three entitled Room. Like the trompe l'oeil masterpiece known as the Duke of Urbino's Studiolo from the Ducal Palace in Gubbio (1479-1482) now in the collection of the Metropolitan Museum of Art, the contents but not the occupant of Room are depicted in detailed wooden marquetry panels. During the Italian Renaissance, patrons commissioned large intarsia projects, like the Gubbio Studiolo, as expressions of their wealth and power to confirm their positions in society by illustrating their educated tastes— the images amounting to an idealized autobiography. In contrast, Taylor's Room does not exalt her subject. In this architectural portrait, Taylor examines the habitat and possessions of its resident, who reveals himself to be a character living on the edge of society.

The Room is a trove of objects, both fascinating and mundane: a US Army helmet from Vietnam rests in a display case with a handgun; a deer hoof is mounted on a horseshoe; a lamp has been fashioned from a hollowed-out grenade; the room is inhabited by animals taxidermied or carved. Many of the objects have price tags attached, indicating the multiple uses of the space as a store, a workshop and a habitation. An open window hints that the occupant may have escaped. The east-facing window looks out onto a stretch of land decimated by the incursion of tract-homes which threaten to crowd Room out of existence. Through the opposite window is rocky, virgin desert. There, beauty and entropy entwine, contrasting with the ordered monotony of development. As the rural desert concedes to suburban planning, it becomes what the subject was trying to escape: over-crowded, over-priced and stifling. The old bargain he struck with the desert— freedom for isolation— has been reneged.

Single-panel works installed in the front galleries further chronicle those who are driven by their desire to escape society and who ultimately realize the impossibility of finding respite. In Hank (2007), a shabbily dressed man peddles a bicycle up a mountain incline, and his worried glance over his shoulder suggests that he is fleeing some danger. Slab City (2007) pictures another kind of trouble— two characters, one entirely nude, the other disheveled, ignore what looks to be a person submerged and drowning in an adjacent pond. Taylor's subjects are society's dropouts whose surroundings— a geodesic dome or a VW bus— suggest that they fled to the West in search of the refuge of an alternative lifestyle. Despite their utopian dreams, her characters find themselves in predicaments that are far from enlightened. At least, this is what we imagine; Taylor masterfully piques viewers' interest while leaving many questions unanswered.

A native of Las Vegas, Alison Elizabeth Taylor is concerned with the changing desert and environmental sustainability. This is Taylor's second exhibition at James Cohan Gallery. Taylor graduated with an MFA from Columbia University, New York, in 2005. She has been featured in group exhibitions such as 96 Gillespie's Dirty Pigeons (2005, London); Other America at Exit Art (2005, New York); Truly She is None Other at New Image Art Gallery (2006, Los Angeles); and The Powder Room at Track 16 Gallery (2007, Los Angeles).

To access articles and reviews for Alison Elizabeth Taylor and bio and bibliographic information, please consult her artist page at www.jamescohan.com/artists/alison-elizabeth-taylor