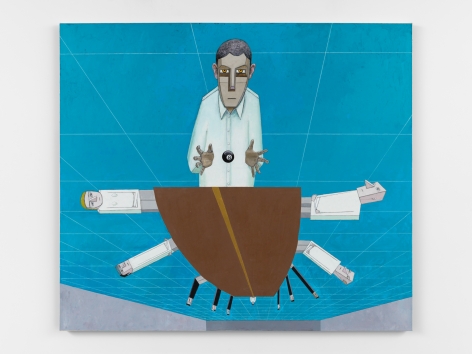 MERNET LARSEN
Behind the Eight Ball 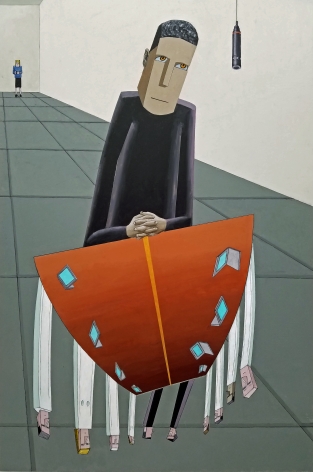 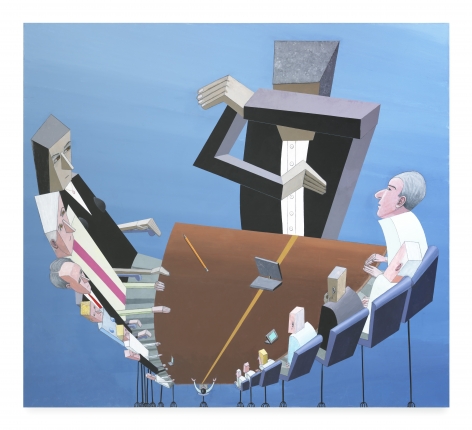 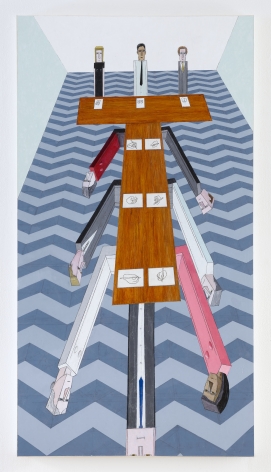 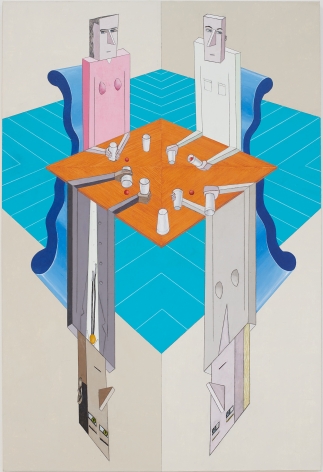 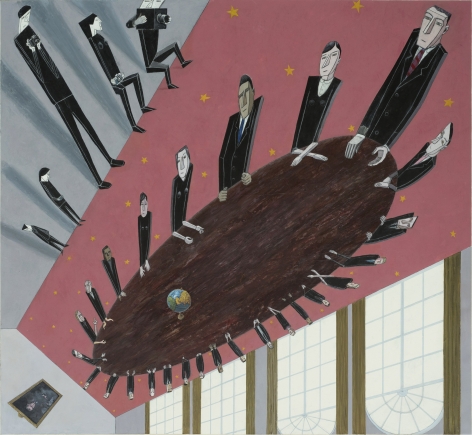 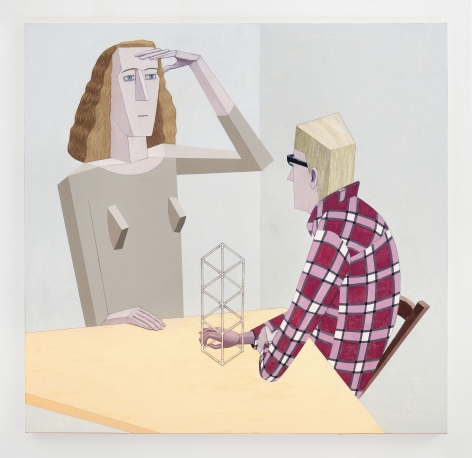 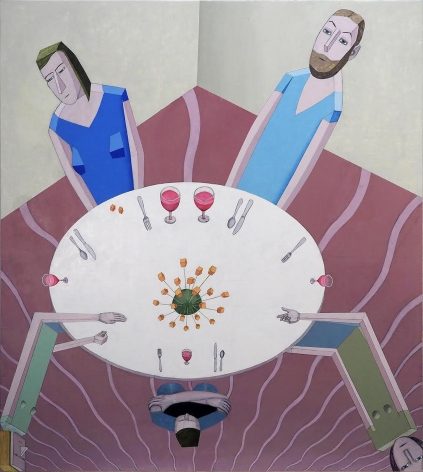 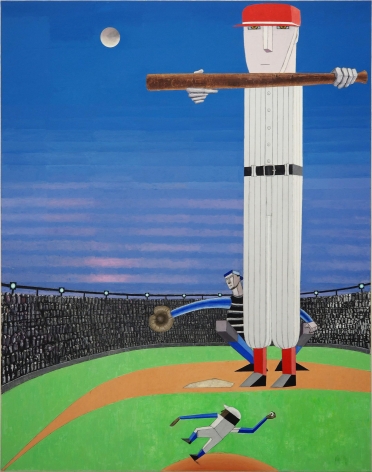 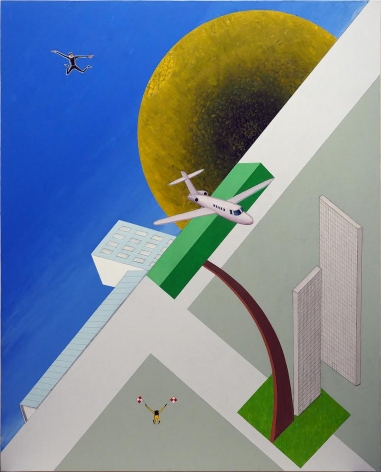 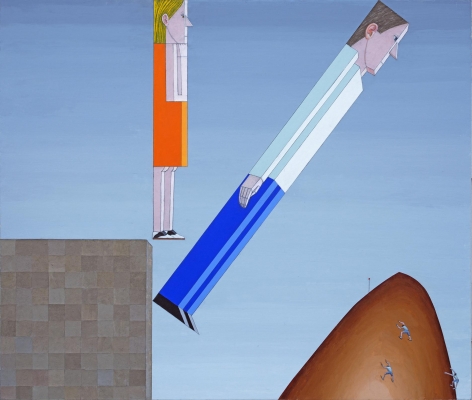 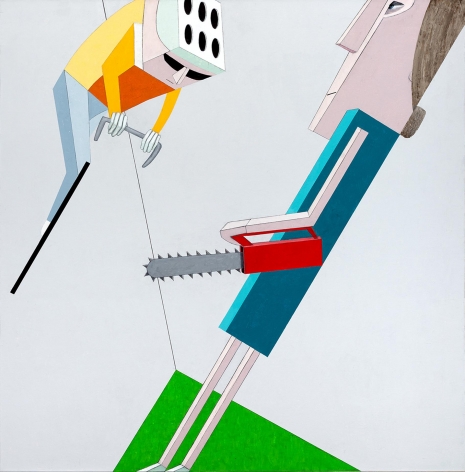 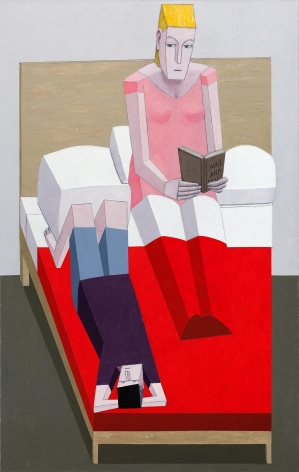 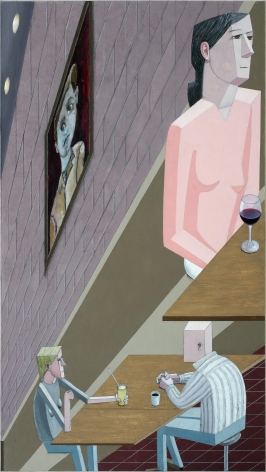 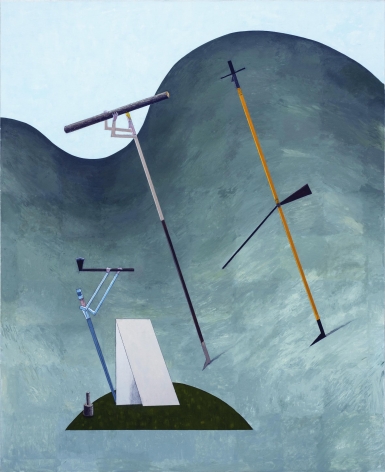 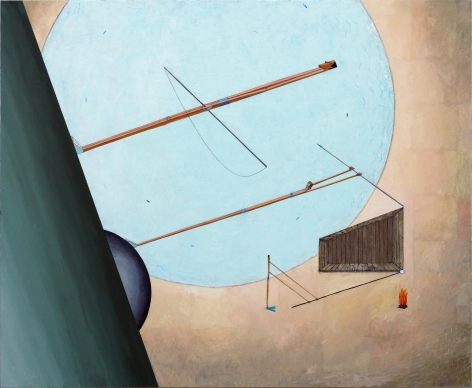 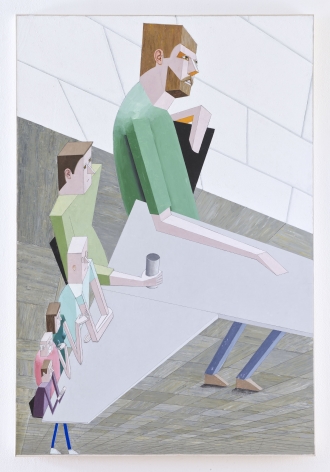 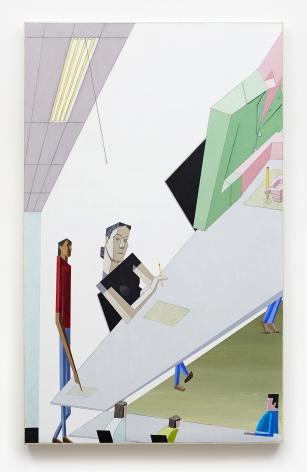 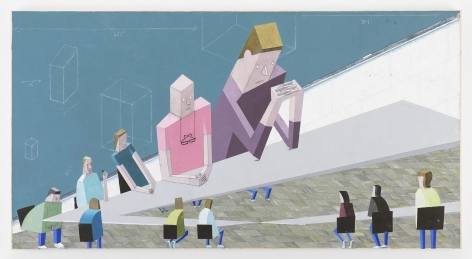 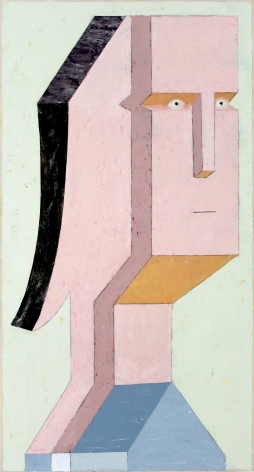 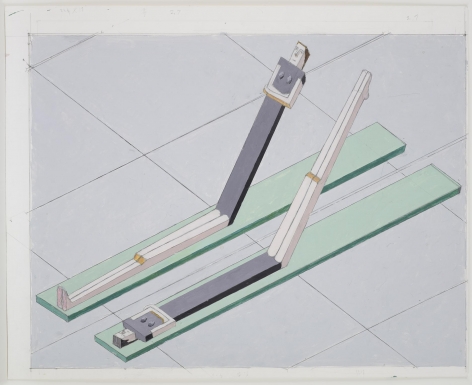 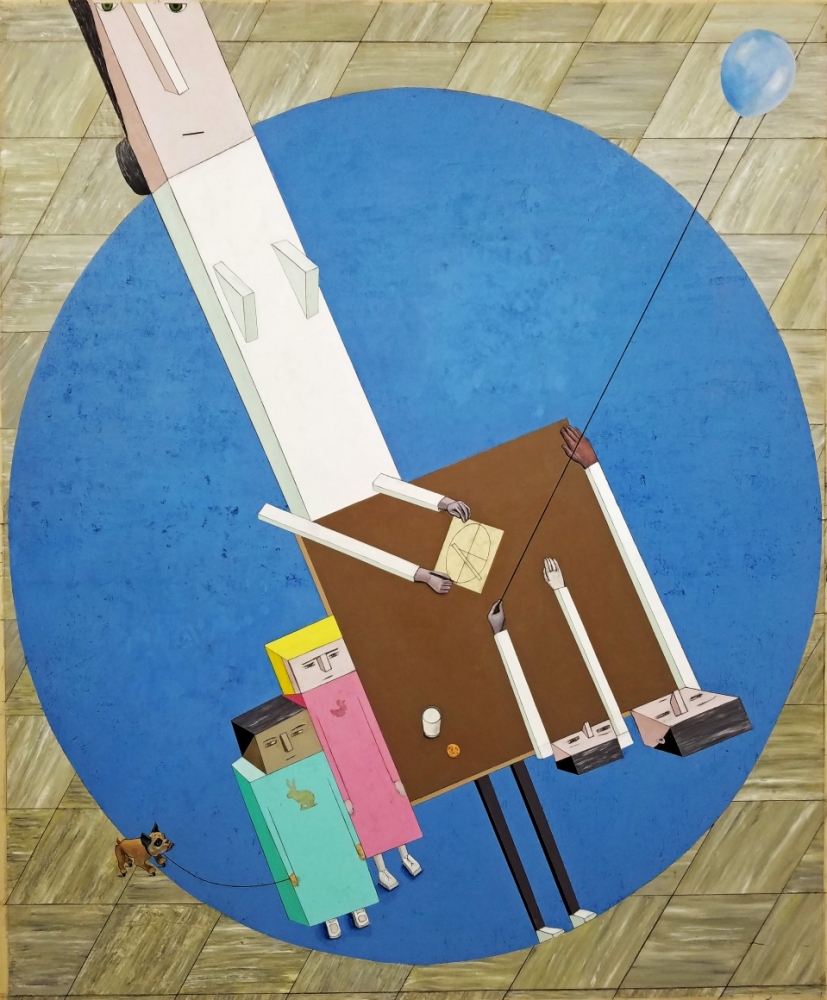 Mernet Larsen’s paintings are simultaneously rooted in and distant from reality. Taking inspiration from the geometric abstractions of El Lissitzky and the narrative stylization of 12th Century Japanese and early Renaissance paintings, Larsen’s vertiginous spaces often rendered in reverse perspective, and hard edged figures offer familiar version of reality that is analogous and parallel to our own. Developed over the last 40 years, Larsen’s independent and meticulous approach to representational painting “reaches toward, not from, life.”

In the early 2000s, Larsen came to a crucial turning point in her career, saying, “I decided that I wanted to paint old-fashioned narrative paintings with volume and depth and the essences of significant actions. I developed a longing for pictures evoking a classical sense of permanence, solidity, in the spirit of 15th century Italian painting. But I knew these paintings would be statements of longing, of recognition that essences must be constructed, not uncovered. They would have to be makeshift contraptions, taking into consideration the issues I had been dealing with for the previous 40 years.”

This realization opened Larsen up to an entirely new way to look at her painting, and continues to inform her work. Understanding the canvas as a constructed field rather than a way to uncover a truth or reality lying beneath the surface allows Larsen to tackle a multitude of spatial approaches and subjects that we see in her work. By distilling what Larsen refers to as the “essence” of narrative painting—the figure inhabiting physical space—through geometry and skewed perspective, she is able to create disquieting and unfamiliar feelings surrounding the often commonplace situations she creates. Despite this constructed tension, Larsen’s paintings are commonly infused with a humor and uncanny juxtaposition, making the works relatable and alien to the viewer simultaneously.

Mernet Larsen (b. 1940, Houghton, Michigan) has exhibited extensively since the late 1970s and has been the subject of over thirty solo exhibitions, including Mernet Larsen: The Ordinary, Reoriented, Akron Art Museum, 2019, and Getting Measured: Mernet Larsen, 1957-2017, Tampa Museum of Art, 2017. She has been featured in more than seventy group exhibitions, including presentations at the National Museum of Women in the Arts, Washington D.C., the American Academy of Arts and Letters, New York, NY and multiple other exhibitions in London and New York. Her work is in numerous collections, including the Whitney Museum of American Art, New York, NY; the Los Angeles County Museum of Art, CA; the Carnegie Museum of Art, Pittsburgh, PA; the Museum of Fine Arts, Boston MA; and the Walker Art Center, Minneapolis, MN among others. Larsen received her BFA from the University of Florida, and her MFA from Indiana University. She lives and works between Tampa, Florida and Jackson Heights, New York. 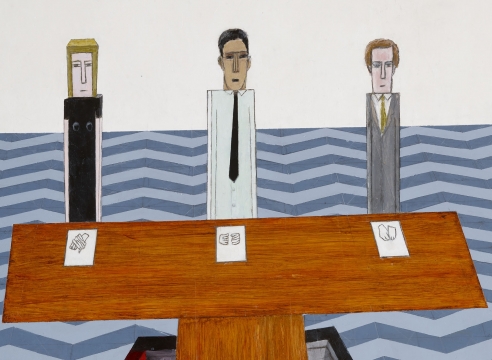 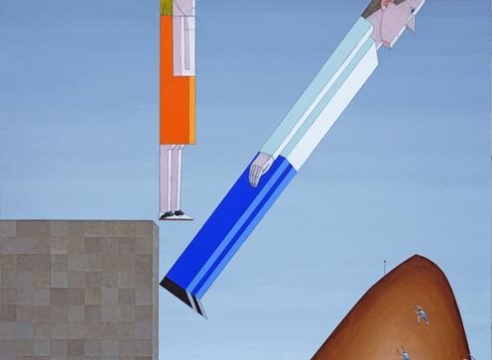 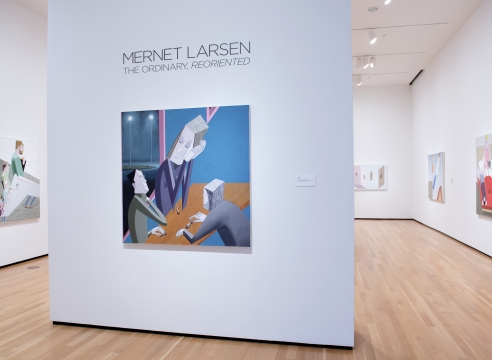 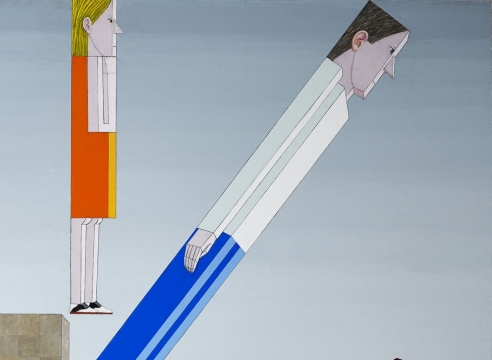 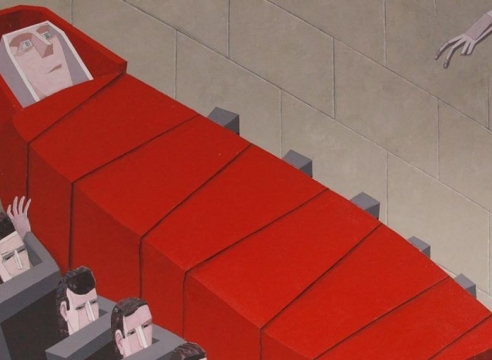 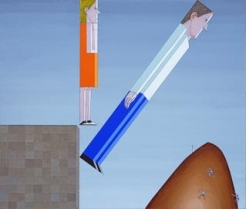 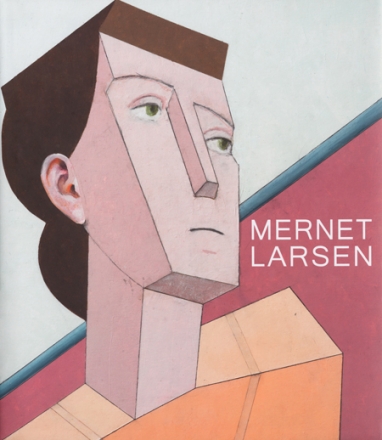 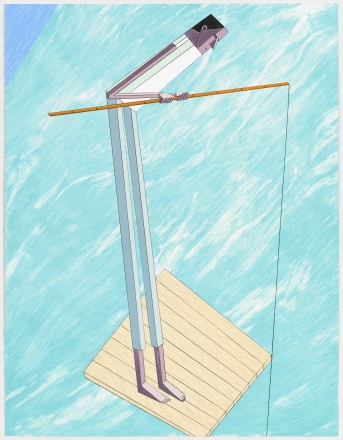