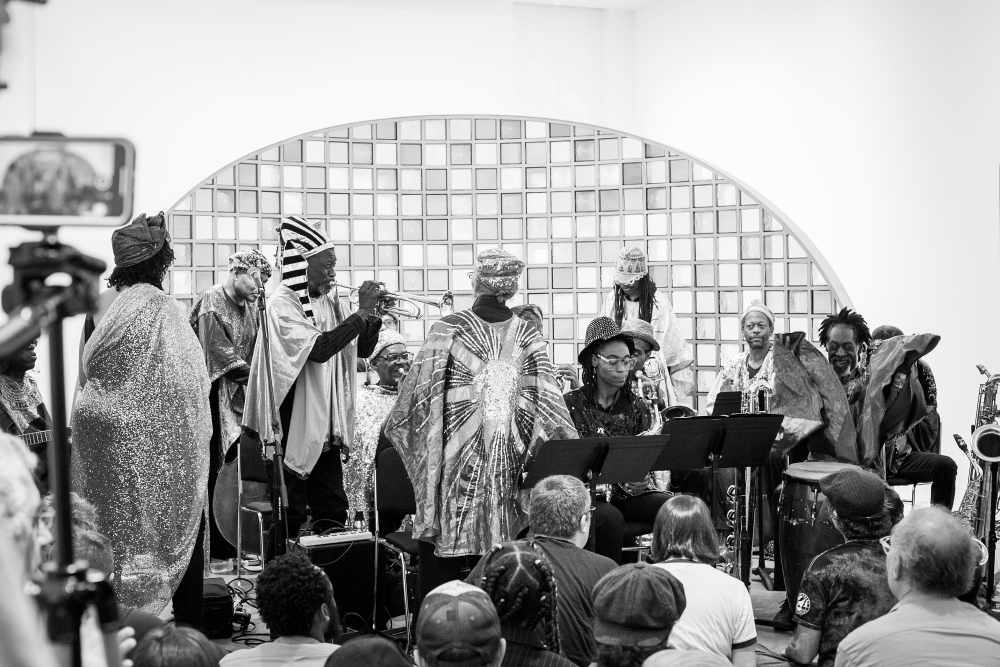 Founded in the mid-1950s, The Sun Ra Arkestra became the primary conduit through which polymath jazz composer, bandleader, pianist, poet, and philosopher Sun Ra expressed his visionary perspective. Sun Ra’s mythology transposes the forced dislocation of the African diaspora from slave ship to spaceship, wielding technology and music as an instrument for utopian black interplanetary migration, with the Arkestra as its vehicle. When Sun Ra left planet Earth in 1993, his role as leader of the Arkestra was taken by John Gilmore before the latter’s ascension in 1995, when Marshall Allen assumed its helm. An alto saxophonist, flautist, and electronic valve instrument player who joined the Arkestra in 1958, Allen lived, rehearsed, toured, and recorded with Sun Ra almost exclusively throughout his musical career. At age 93, Allen is the only living member of the Arkestra’s original core group, but maintains that its current incarnation is no ghost band. To the contrary, for Marshall Allen, Sun Ra is not gone. Allen and the other members of the Arkestra continue to live at the Sun Ra residence in Philadelphia, the group’s communal base of drug, alcohol, and sex-free operations since 1968. There, Allen writes fresh arrangements of Sun Ra’s tunes and composes new music for the Arkestra, committed to a life of discipline centered on the further development of Sun Ra’s musical precepts. With such a massive, joyous songbook that encompasses spiritual grooves, sing-along chants and ecstatic fire music, the Arkestra continues to traverse their namesake’s spaceways. As far back as the ‘50s, Sun Ra used to say that the Arkestra was playing the music of the twenty-first century. In today’s political climate their message is more relevant than ever.

Due to high demand and the intimate nature of James Cohan Gallery, we have added a second performance by the Sun Ra Arkestra. The Arkestra will now perform two hourlong sets, at 2pm and 4pm. 100 attendees will be admitted to each performance on a first come, first served basis.