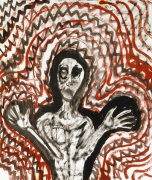 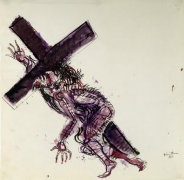 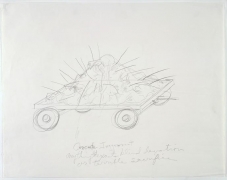 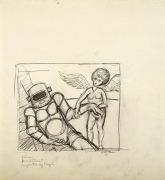 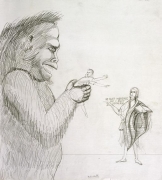 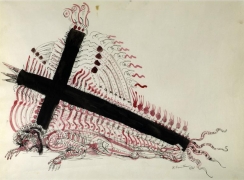 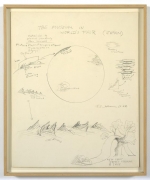 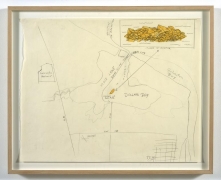 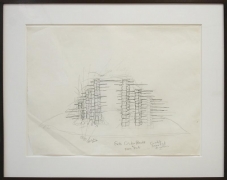 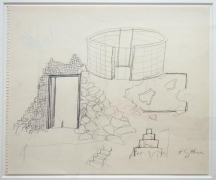 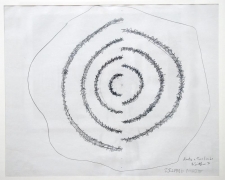 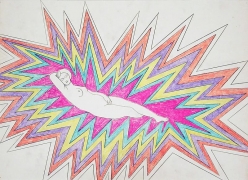 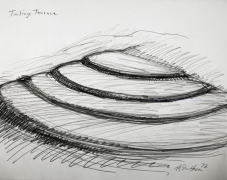 Robert Smithson's three-month trip to Rome in 1961 concretized and electrified the issues that had been preoccupying him in New York, chief among them a struggle with and even against the modern in both art and society. Like other very bright young men of mid-century he found the dominant pieties of his moment lacking in ferocity. Smithson thought Happenings and other exhibitions artistic fashions too easy, too sloppy, and too fleeting. He sought something more, something implacable and grand.

Fueling this desire was an idiosyncratic course of reading that folded together textbooks on religious painting, the novels of William S. Burroughs, and writing by reactionary British authors of the first half of the century such as T.S. Eliot. Chief perhaps among this last group was critic and poet T.E. Hulme, whose "religious attitude" did not indicate literal religiosity, but an orientation towards the absolute and away from a sentimental humanism that promoted the perfection of man. Eschewing the Renaissance, Hulme elevated the Byzantine, which he characterized as "The disgust with the trivial and accidental characteristics of living shapes, the searching after an austerity, a perfection and rigidity that human things can never have." Hulme sensed a coming revival of these values in art and society. Fifty years later, Smithson agreed, writing to the gallerist who offered him a show in Rome, "Art today is in a transformation state… Collectors, who have been buying the most 'advanced' non-objective work, are now interested in the absolute." It was the absolute, an alternative to modern art and life, that Smithson sought in Rome.

The drawings and collages he showed at the Galeria George Lester in Rome most obviously manifest the "religious attitude" in their subject matter. They feature Christ, John the Baptist, Mary, and angels, often in recognizable classical contexts, such as the agonized Christ Carrying the Cross and Christ in Limbo, limbo here rendered as a gorgeous primordial soup. His drawing style evokes the pre-Renaissance art that interested Smithson in this seat of early Christianity: the figures radiate geometric shapes and lines, and they themselves are simultaneously severe and decorative, the bodies heavily contoured. Smithson scorned Botticelli's soft Christ in favor of a mystical Christ in agony, his wounds radiating spirals; the angels too are inhuman, ecstatic rather than cherubic. What he found in Rome—the labyrinthine catacombs, gold skeletons—was a "savage splendor" that exceeded his imagining, as he found himself unexpectedly drawn to the Baroque as well as medieval art.

These "absolute Ikons of Life and Death" are characteristically humorous as well, a humor issuing from the contrast of terrible greatness with the banalities of the modern world. Creeping Jesus sets Christ in a contemporary landscape of cars and ads, his attendants now ladies proffering the latest in kitchen appliances. The title comes from a William Blake invective against the humble, human Christ, and in his writing Smithson twice used the phrase to mock the image of Christ in the contemporary New York of art bars and radioactive chemicals. (It's worth remembering as well that James Ensor was one of Smithson's favorite artists of this moment, and the collage shares something of the irony of Ensor's 1888 painting, Christ's Entry Into Brussels in 1889.) Related drawings show Christ pumping gas at an Esso station and deposed from the Cross in an astronaut's suit, in the most pointed collision of exhibitions and present.

Looking back on this period, Smithson saw his time in Rome and the art he made there as the culmination of his desire to immerse himself in the roots of Western civilization and, by repudiating the modern to return to it clear-eyed. The fever of the early 1960s cleared the way for him to move into the work for which he is now best-known, the geometric sculptures, Nonsites, and Displacements, as well as his seminal Earthworks, such as Spiral Jetty and Amarillo Ramp. But there are continuities as well between this early period and later work. His passion for "primordial beginnings"—like entropy, conceived in opposition to the dominant ideology of progress—later reached out beyond early Christianity to the dinosaurs and King Kong, inhabitants of a fantasized prehistory, and then to the geologic time of the Earthworks. We might also see the "crystal world" that so profoundly permeated Smithson's later thinking as rooted partly in Hulme's privileging of the severe geometry of the "inorganic world" of math and the physical sciences as a modern incarnation of the Byzantine.

Finally, Smithson continued to search for the absolute, to look beyond momentary concerns even as his youthful certainties grew more nuanced. His passion sustains the ambition of Spiral Jetty, of course; it also appeared in flashes such as Concrete Juggernaut, 1971. The drawing (invoking a different but equally extreme religious tradition) proposed a rolling platform carrying a pile of concrete spiked with metal rods, and represented "anything that exacts blind devotion or terrible sacrifice." The title recalls that of a 1966 Audubon Magazine article that castigated the national highway system as a "concrete juggernaut," crushing everything in its path. For Smithson, the concrete (now shattered) became central to an already-ancient ritual. Looking ahead eons after the highways had come and gone, with concrete as our present-day marble, he rendered the modern landscape, like that of ancient Rome, as a "scrap heap of antiquities."