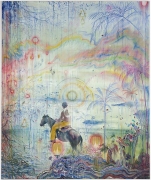 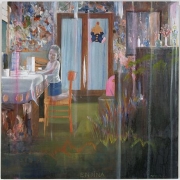 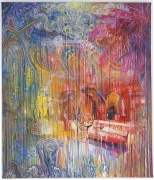 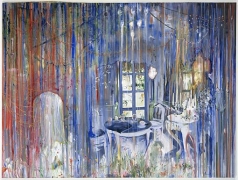 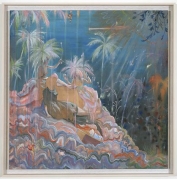 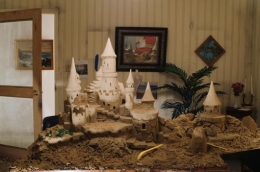 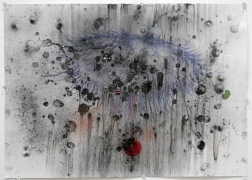 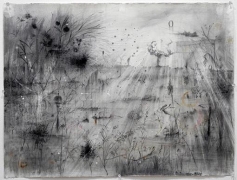 James Cohan Gallery is pleased to announce the opening of an exhibition entitled Flavio and Palermo (in the summer) by Italian painter and conceptual artist, Manfredi Beninati on February 17, 2007 and running through March 17. For Beninati's second solo exhibition in New York, he will include new paintings, sculpture and installation. This body of work is dedicated to the artist's brother, Flavio.

Beninati is best known for work that addresses the nostalgia for childhood through the lens of memory. Using the visual vernacular of dreams and fairy tales, Beninati's work is filled with characters and environments that create a space where the unconscious imagination is rendered visible. His imagery embodies the same slippage between fantasy and reality as can be found in the work of Antonio Ligabue and the writings of Italo Calvino and Lewis Carroll.

In the painting Untitled (Fes-Hagosh), the night sky is bright with what appears to be the acid green and fluorescent pink blaze of the Aurora Borealis. Other mysterious light effects emerge from the ground, revealing a world that is both dreamlike and unsettling. In Untitled (Pirrina), a bathroom has been obscured by flowers, overgrown plants and streamers that transform into psychedelic patterns throughout the composition. While reinforcing Beninati's fascination with liminal spaces, these new paintings continue to reveal his interest in pushing the psychological and material boundaries of the work.

Beninati will also create an installation similar to his much acclaimed contribution to the Venice Biennale in 2005, in which the viewer peered through a glass door into a room of an abandoned eighteenth-century palazzo. For this exhibition, Beninati plays with the viewer's sense of perception with an extraordinary simulacrum of a contemporary domestic environment.

Manfredi Beninati was born in 1970 in Palermo, Italy. After studying the Classics, Beninati entered the Faculty of Law at Palermo University. In 1990 he began studying film at the Centro Sperimentale di Cinematografia Roma, where he worked as an assistant director until 1994. He then moved to London, where he began painting full-time. His work was recently seen in Rome at Lorcan O'Neill Gallery, and was also included in the 2005 Venice Biennale. Recently awarded the Rome Prize by the American Academy in Rome, Beninati exhibitionsly lives and works in Palermo.