Detail: Towards an unseen force

Detail: Towards an unseen force

Detail: In the manner of water and light

Detail: In the manner of water and light 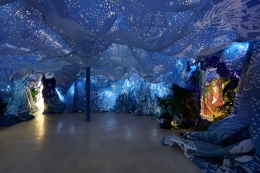 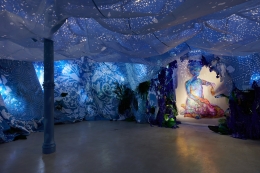 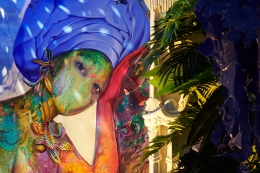 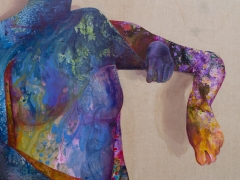 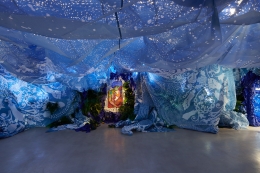 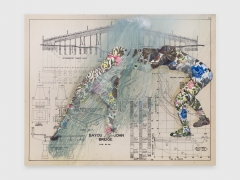 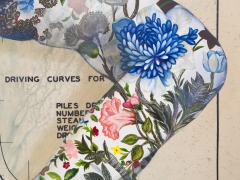 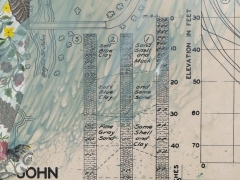 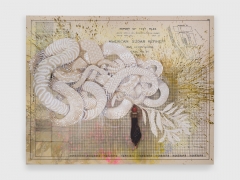 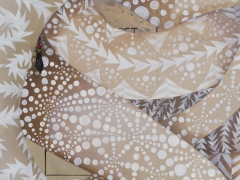 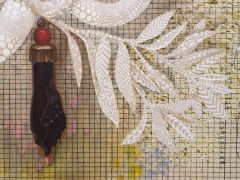 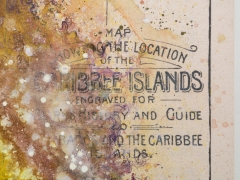 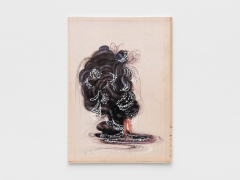 James Cohan is pleased to present A Drexcyen Chronocommons (To win the war you fought it sideways), an exhibition of new work by Firelei Báez, at the gallery’s Lower East Side location from April 20 through June 16. This is the artist’s debut solo exhibition at James Cohan. The gallery will host a reception with the artist on Tuesday, April 30, from 6-8 PM.

Dominican-born, New York-based artist Firelei Báez reconfigures visual references drawn from the past to explore new possibilities for the future. Incorporating subject matter from a breadth of diasporic narratives, the artist’s intricate works on paper and canvas, large-scale sculptures, and installations explore the ways in which personal and collective identities are shaped by inherited histories. Báez incorporates the visual languages of regionally-specific mythology and ritual alongside those of science fiction and fantasy, to envision identities as unfixed, and inherited stories as perpetually-evolving. By rendering spectacular bodies that exist on opposite sides of intersecting boundaries, Báez carries portraiture into an in-between space where subjectivity is rooted in historical narratives as much as it can likewise become untethered by them.

Acknowledging the reciprocal nature of migration as a non-linear course of movement, Firelei Báez creates sites of connectivity, where overlapping histories and modes of understanding coexist. For A Drexcyen Chronocommons (To win the war you fought it sideways), the artist has created an immersive installation in the main gallery that spreads into the reception area. The space is cocooned in hand-perforated blue tarp—often used for temporary shelter, and thus a symbol of both disaster and refuge—casting light onto material patterned with black diasporic symbols of nurturing and resistance. Overhead is a geo-specific map of the stars as they appeared in the night sky at the onset of the Haitian Revolution (1791-1804). A successful uprising led by self-liberated enslaved people against the French colonial government in Saint-Domingue, the Haitian Revolution was an early precursor to abolition movements internationally and had an indelible—if often unacknowledged—impact on the ideological and geopolitical landscape of the 19th century world. The installation’s oceanic quality suggests the broader history of black diaspora and the Middle Passage, in relationship to Glissant’s theory of the ocean as a connector and a repository of physical memory.

Facing each other within the tented installation are two imaginative portraits of empowered, black female protagonists. The viewer is positioned in the discursive space between their mutual gaze. The artist’s portrayals draw reference to the Haitian priestesses whose revolutionary contributions are absent from its heroic retellings, and tignons, head-coverings women of color were legally required to wear in 18th century New Orleans. Rendered in spectacular color, their bodies are in flux—always in the process of being made and unmade. For Báez, painting becomes a means of giving form to memory, evincing the idea that presence is not negated by passing.

With A Drexcyen Chronocommons (To win the war you fought it sideways), Báez has created a generative space in which the transmission of dominant historical narratives and ideologies can be reexamined, subaltern histories excavated, and new speculative possibilities explored. Throughout the run of the exhibition, the artist will organize readings and programs that break down and expand the white cube of the gallery, inviting others to enrich and activate the space with their own narratives and experiences.

Firelei Báez (b. 1981, Dominican Republic) received an M.F.A. from Hunter College, a B.F.A. from the Cooper Union’s School of Art, and studied at the Skowhegan School of Painting and Sculpture. Her work is the subject of 2019 solo exhibitions at the Witte de With Center for Contemporary Art, Rotterdam, the Netherlands, and the Mennello Museum of Art, Orlando, FL. The artist’s monumental outdoor sculpture, 19.604692°N 72.218596°W, is included in En Plein Air, the 2019 High Line Art exhibition. Her current commission for the Modern Window at the Museum of Modern Art, New York, is on view through November. Báez recently participated in the 2018 Berlin Biennale, and was also featured in biennials Prospect.3: Notes for Now (2014), Bronx Calling: The Second AIM Biennial (2013), and El Museo’s Bienal: The (S) Files (2011). Her major 2015 solo exhibition Bloodlines was organized by the Pérez Art Museum Miami and travelled to the Andy Warhol Museum in Pittsburgh.