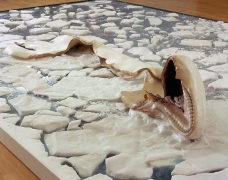 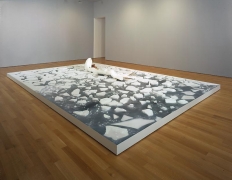 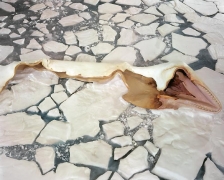 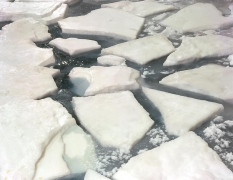 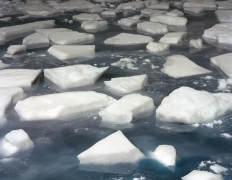 James Cohan Gallery is pleased to present our second solo show by Texas-based artist, Erick Swenson, opening May 22 and running though June 30, 2007. The exhibition will consist of a single large-scale installation that exemplifies Swenson's stated interest in commanding a space by "utilizing the quietness of one object."

With skillful object-making and continued inspiration from natural history dioramas, set design and special effects, Swenson creates ambiguity with his elaborately constructed tableaux. Untitled, 2007 is a meticulously crafted work measuring 15 x 24 feet that portrays sculpted fragments of a killer whale's corpse floating in a transparent-blue watery field of poured resin. Cast chunks of ice with cavernous shadows and reflections of sunlight surround the subject that appears caught in a perpetual state of drifting at sea.

The representation of a once-powerful creature rendered defenseless is a consistent subject matter in Swenson's works. Often depicted in tragic moments, his animals comment on the fragility of life and one's own vulnerability. In Untitled, the viewer is witness to an unexplained scene frozen in a single moment. By giving few clues as to how this animal has arrived in this state, Swenson sets the scene for the viewer to determine the events leading up to the creature's fate, otherwise shrouded in mystery. The central theme becomes less about the immediate subject at hand; instead resonating more in the relationship between object and viewer, highlighting the pathos and inevitability of forces that are greater than both. C. Sean Horton writes, "As allegories for the human condition, Swenson's sculptural installations masterfully speak to the power of myth to address ideas that might otherwise seem sentimental or pretentious."

Swenson's work has received solo exhibitions at the UCLA Hammer Museum, Los Angeles, California (2003), the Villa Stuck, Munich, Germany (2002) and was included in the 2004 Whitney Biennial. His work is in the permanent collections of the Dallas Museum of Art, the Modern Art Museum of Fort Worth, the Saatchi Collection, and the San Francisco Museum of Modern Art. Swenson exhibitionsly lives and works in Dallas, Texas.